Always divided into four sectors, with water playing an important role for both irrigation and ornamentation, the Persian Garden was conceived to symbolize Eden and the four Zoroastrian elements of sky, earth, water and plants.

UNESCO has inscribed 9 Persian gardens as the tangible cultural heritage of Iranians in 2011 that have influenced garden planning from India to Spain. These gardens exemplify the diversity of Persian garden designs that evolved and adapted to different climate conditions while retaining principles that have their roots in the times of Cyrus the Great, 6th century BC.

Pasargadae was the first capital of the Achaemenid Empire. In Pasargadae, the Iranian garden is built with all the essential features of its architecture. Concentration on religious elements and their conceptual usage in architectural structures, the geometric pattern of the garden along with the pavilion and water pipes inside the Pasargadae gardens, the appropriate distribution of water within the complex and the combination of architectural elements and structures with Nature are what make this garden the mother of Iranian gardening. 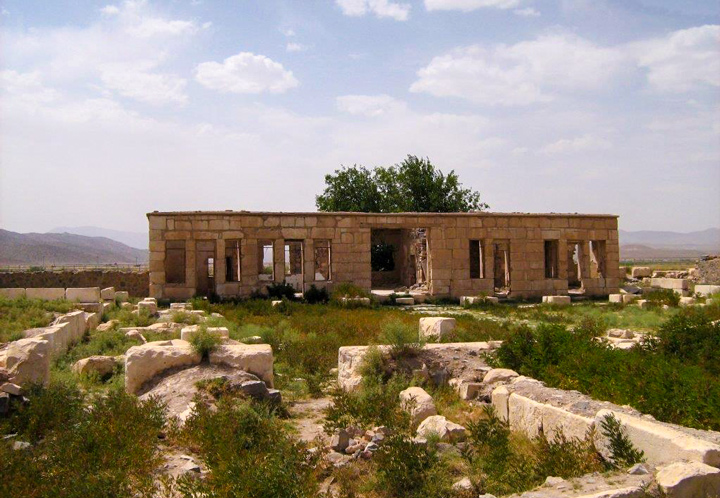 The architecture of Eram Garden follows the style of Qajar era and imitates the Zand era’s trends. This world heritage site is a unique masterpiece due to its architecture, tile works, plasterworks, and eye-catching paintings. It is also, the botanical garden of Shiraz due to the variation of plants. With its well-designed paths with beautiful trees on both sides, Eram Garden is a charming place for nature lovers. 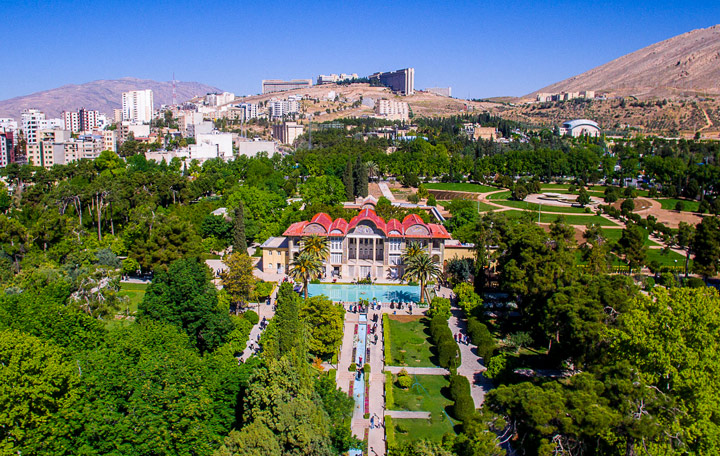 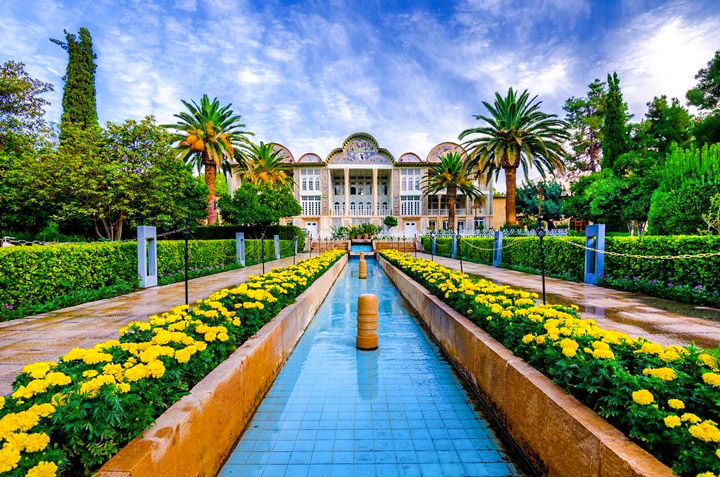 Chehelsotoun (forty columns) Garden-Palace is one of the royal gardens left from the Safavid period in Isfahan. The garden has a pavilion with 20 columns and is known as the Forty Columns because a reflecting pool doubles their number. The pavilion stands in a garden of 67000 square meters which is well planted with beautiful trees. The beautiful Chehelsotoun Garden-Palace is one of the most important attractions of Isfahan. 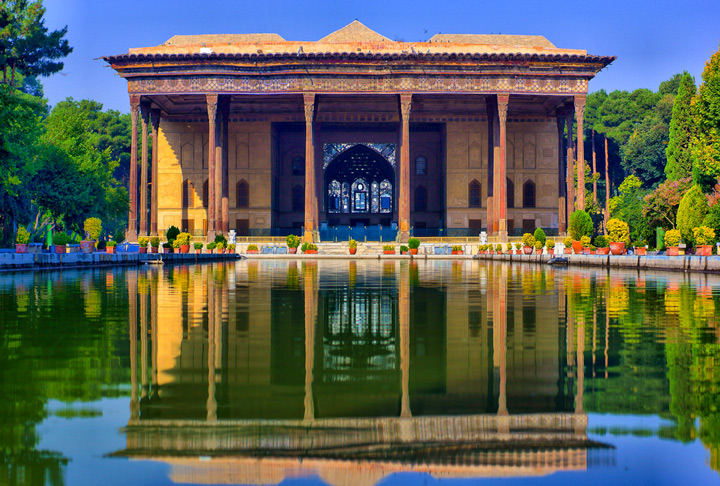 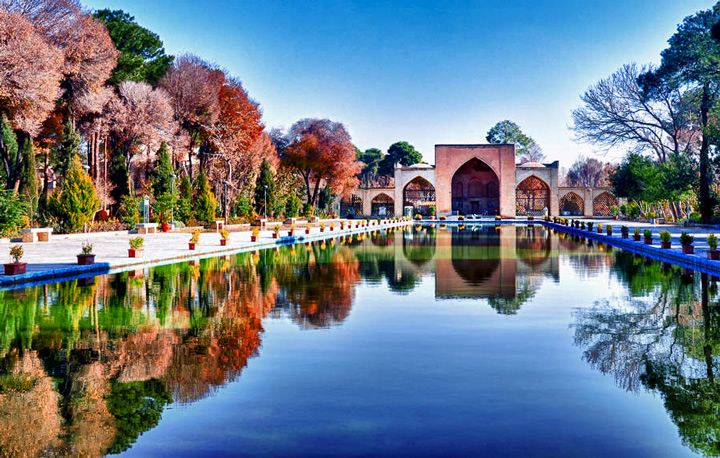 Located in Kashan, Fin Garden is one of the most beautiful and famous Iranian gardens which is considered as a perfect example of Iranian gardening. This garden was created by Safavid’s Shah Abbas I and was further developed and expanded by Qajar kings. It occupies an area of 23000 square meters and includes a central yard and surrounding walls with watchtowers that belong to the Safavid era. Water is an essential element in the design of Fin Garden. The running water in this garden originates from Soleymaniyeh spring and flows in its pools and channels. 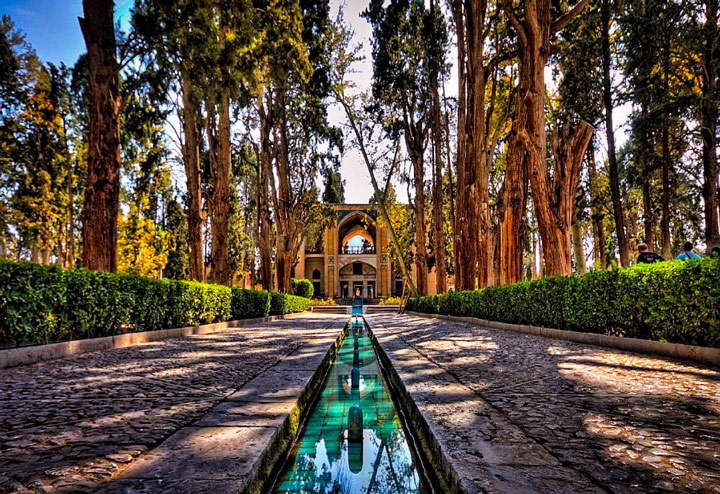 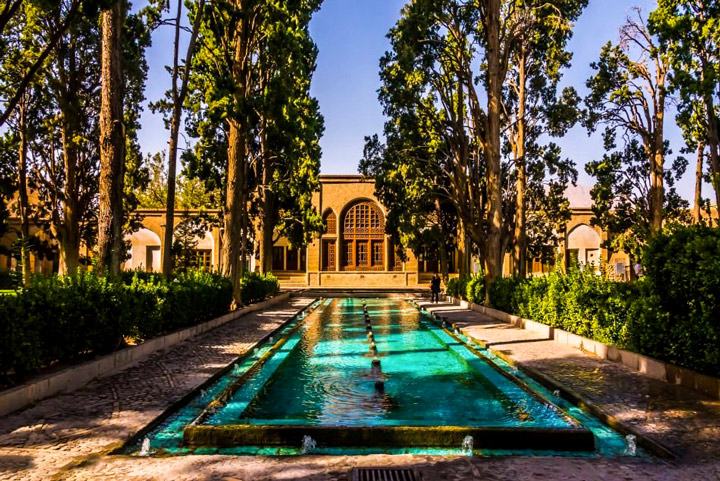 Built during the 19th century (Qajar era), Shazdeh Mahan Garden is a rectangular green oasis surrounded by brown desert. The first moment you are in the arid desert, the next you find yourself amid tall green trees and cascading qanat water. The presence of fertile soil, sunshine, breeze and the access to qanat water have made it possible to create a garden on this scale in a miraculously dry and waterless context. 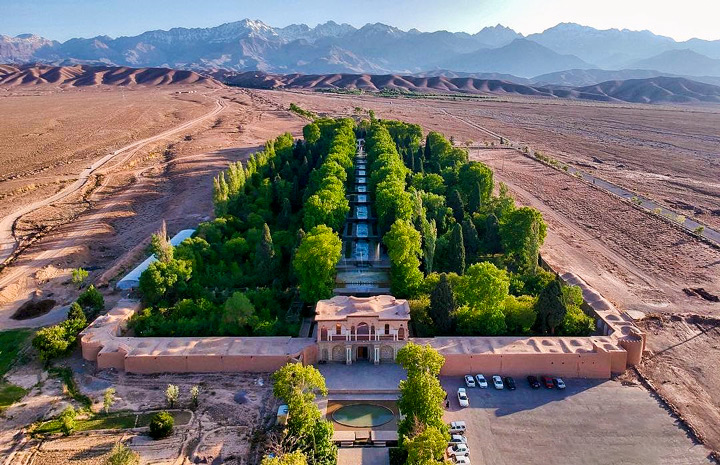 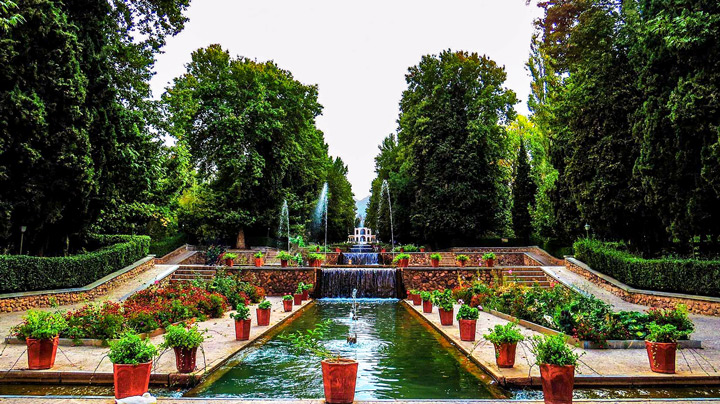 Located in Mehriz, Yazd Province, Pahlavanpour Garden has embraced a small but splendid pavilion that was built during late Qajar era. The garden owes its reputation to the stream of water passing through it. This water originates from “Hasan Abad” qanat system. There are old and elevated plane trees standing alongside the stream. Due to its beauty and unique features the garden is considered as one of the most spectacular places to be worth visiting in Iran. 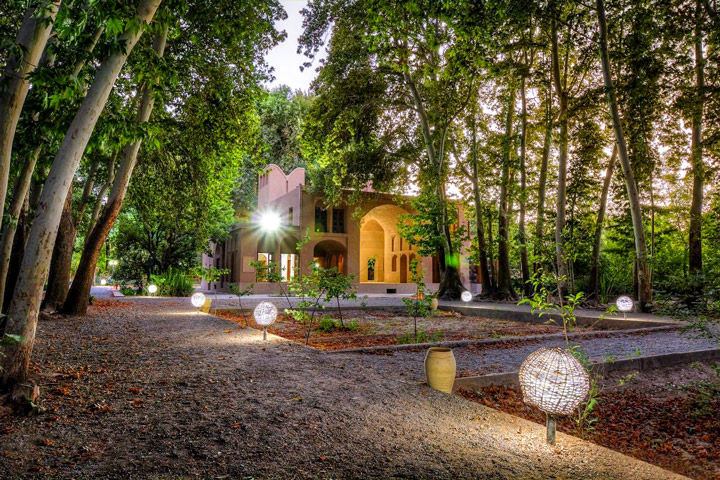 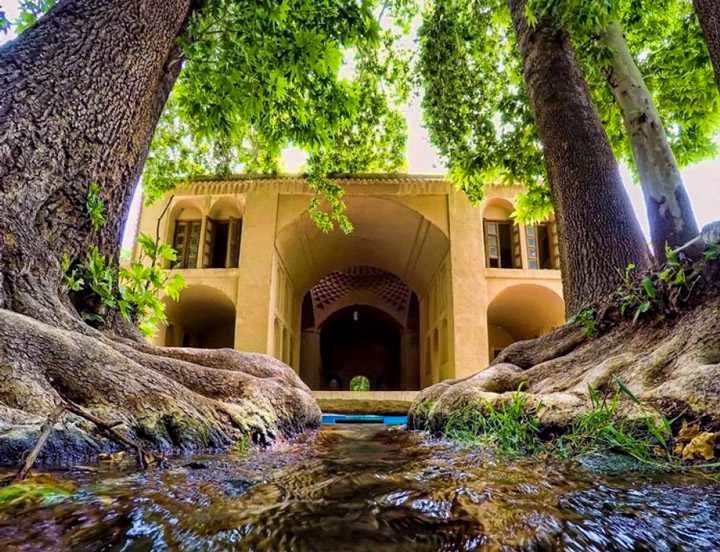 With its towering “Badgir” (wind-catcher) which is standing over 33 meters, Dowlat Abad Garden is located in Yazd, the central desert-like city of Iran. The “Hashty” building is at the heart of the garden and facilitates the air ventilation and water passage through it. The long pool between the entrance and the mansion in it, creates an awesome setting for the building. In addition, this garden embraces the tallest winding lane in the world. 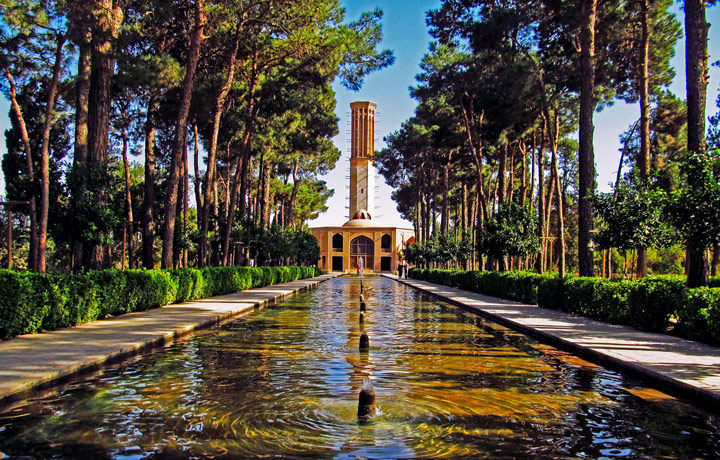 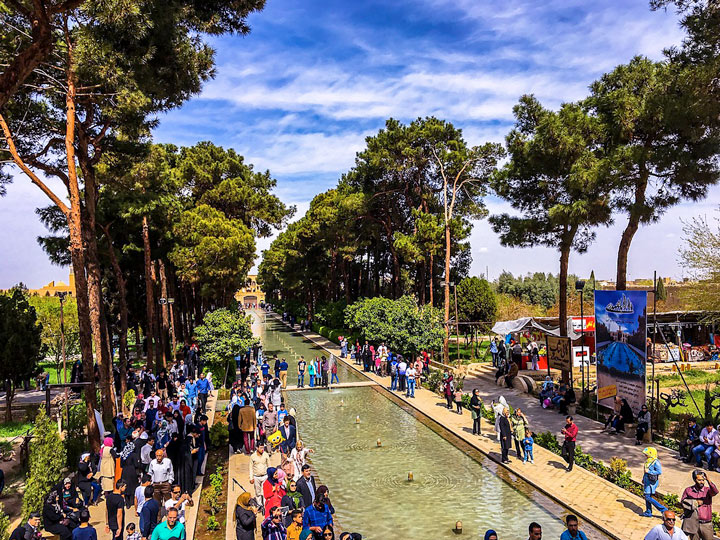 Built during late Zand and early Qajar period, Akbarieh Garden was constructed adjacent to the qanat and the slopes of Mount Bagheran and has an area of 45000 square meters. In addition, Akbarieh Mansion has one of the most unique architectures. Turkish architecture and the application of Russian architecture to some extent and the combination of the two with Islamic art have given this historical building a very special form. 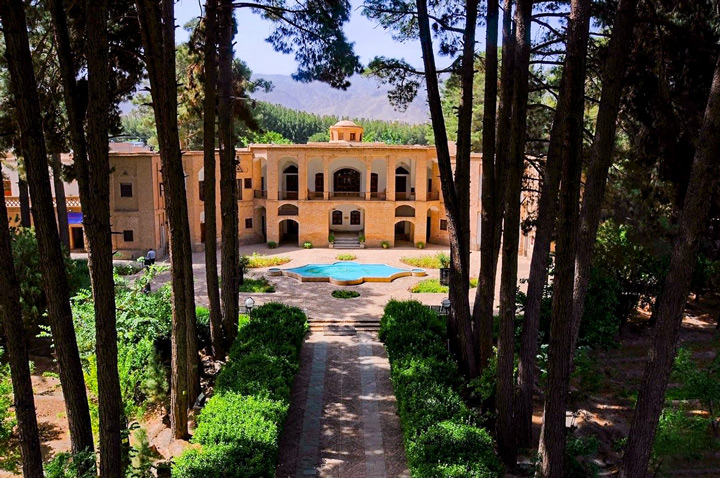 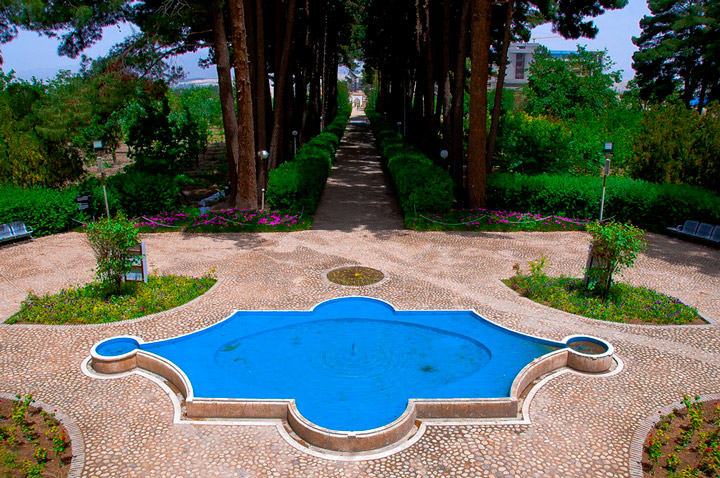 At a distance of 9 km away from Behshahr, Abbas Abad Garden is extended between the forest and hillsides of the Alborz Mountains. The garden is the most important non-desert garden in Iran. The Abbas Abad Garden complex belongs to a water dam, the lake and water reservoir behind it. The flower garden, watermill, mansion, and the two brick-made watchtowers in this complex were built at the order of Shah Abbas I. 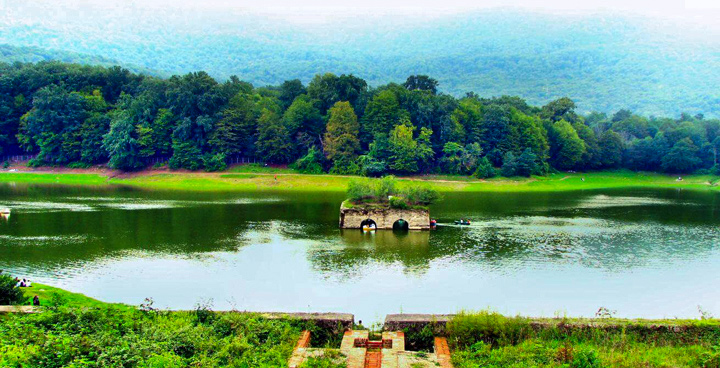 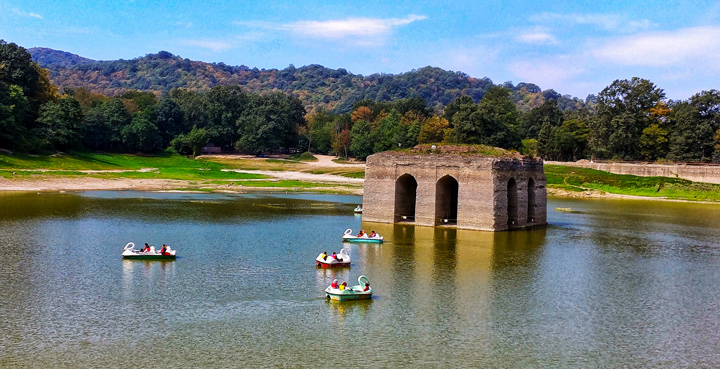